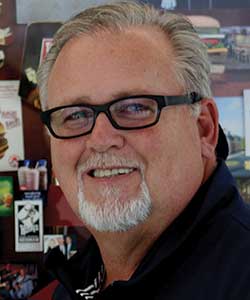 Joe is the third generation in his family to work in the fresh produce industry. His Grandfather Vito owned a horse and wagon and was a produce peddler by trade, in Saginaw, Michigan. His father Philip, a WWII Veteran used his GI Bill to get a loan to start the Saginaw Fruit Company in 1946 (Michigan) with his brothers Leo and Sam. In 1951 Philip (Phil), started the Loiacano Fruit Co, also based in Saginaw, MI. In the summer of 1966 Joe started to work with his father two days week learning the business.

Joe worked for his father until he graduated from high school, and went into the US Army. Upon completion of his military service he used his GI Bill to attend Saginaw Valley State University. His foray into the business world brought little to no success. He took a summer job loading trucks at the Saginaw Fruit Company.  Joe worked himself off of the docks to tractor trailer driver, into sales and management, then as a buyer.

Joe has worked for Sysco Food Services Corp., The Crosset Company, Metro Media Restaurant Group (Ponderosa Steak House, Bonanza Family Restaurants, Steak and Ale Restaurants, and Bennigan’s), he also owned National Produce, Inc., from 1992 until 2006. IN 2006 he worked for Ruby Tuesday, He then went to work for the Kroger Company. In 2011 he accepted his current position. Joe is currently responsible for all agriculture purchased by the Wendy’s Company (Fresh, Frozen, or Dry Ingredients).

Joe has been a member of both PMA and United FFVA, and has been involved with both organizations, as a Foodservice Committee Member and Chair for UFFVA. On the PMA BOD, the PMA Foodservice Advisory Committee.