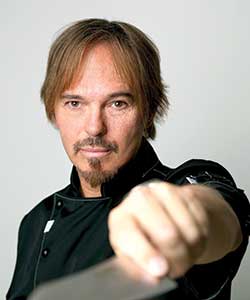 Michael Sabourin is currently a Corporate Chef for Windstar Cruises. Chef Michael spends a lot of his time travelling through Europe, looking for the best quality products for his work.

Chef Michael grow up in Montreal, Quebec Canada where he attended French culinary school, after which he worked 3 years in France and Japan. Michael was previously Executive Chef of the largest cruise ship in the world, the Oasis of the Seas, Sandals Resorts in the Caribbean.

He has studied at the culinary institute in Napa Valley, CA where he has recently been awarded Culinary Institute of America Society of Fellows. Chef Michael has recently been to Paris, France to study the technique of Sous Vide cooking with Bruno Goussault and 3 star Michelin Chef Joel Robouchon and also 3 star Michelin Chef Yannick Allenoo. Michael is one of only 140 chefs trained by the James Beard foundation for Policy and Change and is part of the “Chef action network”, creating a just , healthy, sustainable and delicious food system.