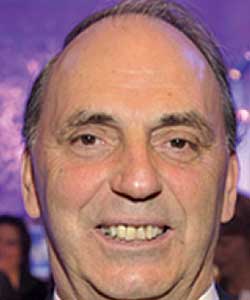 Stefano Cordova is the Vice President of Global Food Innovation & Operations for Starbucks. He began his education in the basement of his family’s bakery and uncle’s pastry shop, then was formalized at the Culinary Institute of Rome. His culinary expertise has been tasted throughout Europe.

After arriving in the States and serving as chef at Il Monello and Il Nido (both 3 stars NYT) in 1984, he opened Ronasi. Ronasi was billed by Zagat’s as the “Best Italian Restaurant in New York City.” His other accolades include “Top Italian Chef in the United States” and “Top Italian Chef Outside Italy,” both of which were bestowed upon Chef Stefano by the Italian Chef Federation.

Chef Stefano is an active member of various organizations such as Slow Food, the American Culinary Federation, the Culinary Institute of America and International Corporate Chefs Association. He has also worked with the Food Project of Boston to increase the use of local produce and fruit in the Boston Public Schools lunch program. Prior to joining Starbucks, Chef Stefano worked for Au Bon Pain, Bertucci’s, Restaurant Associates and Compass Group.

Chef Stefano has a BA degree in Advanced Mathematics and Food & Beverage Administration from the University of Rome.