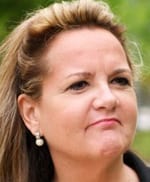 Previously Koteff was president of EK Connects, a marketing and public relations consulting firm, and founding editor of Restaurant Management, a precursor to FSR magazine. She is a sought after speaker, participating as a moderator and panelist at numerous industry events, conferences and broadcast outlets.

As editor-in-chief of Nation’s Restaurant News (NRN) for more than a decade, Koteff directed the editorial operations — daily media and weekly print editions — for the country’s leading foodservice publication. During her tenure, Media Business magazine cited NRN on its annual Power 50 list of most influential business-to-business publications for ten consecutive years. Under Koteff’s leadership, NRN won four Jesse H. Neal National Business Journalism Awards and was a finalist for nine out of ten years.

As the result, Koteff was chosen from a group of 22 other editors whose publications had won Neal Awards to receive the McAllister Editorial Fellowship at Northwestern University, administered through the American Business Media’s Educational Foundation. In 2007 Koteff was honored again, this time as a Top Innovator in Business Publishing by Media Business.