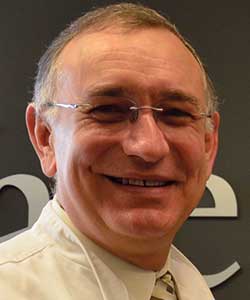 Ron DeSantis is Director of Culinary Excellence and Quality Assurance for Yale Dining. In this role, Chef Ron oversees the production of more than 14,000 meals each day at Yale. He provides leadership for all facets of culinary concept design, development of innovative menus and cuisine, and training of the culinary team.

Before joining Yale, Ron was Director of CIA Consulting at The Culinary Institute of America. This role kept him on the cutting edge of the food service industry. Chef Ron worked closely with the foodservice industry’s blue chip companies and has delivered innovative new products for companies like, Coca-Cola, Yum!, Panasonic, Barnes & Noble Café, Hormel, and Duncan Hines. Chef Ron was a frequent speaker at NAFEM, NRA, ACF, and New Products Conferences. He is also co-author of “Modern Batch Cookery”.

A 1981 CIA alumnus, Chef Ron has received many citations during his professional career, including the highly regarded certification as a master chef (C.M.C.) by the American Culinary Federation (ACF). He was also inducted into the American Academy of Chefs (A.A.C.), the ACF’s honor society. Chef Ron received silver and bronze medals at the Nuremberg Culinary Exhibit, and a gold medal at the ACF National Championship. In 2002, Chef Ron received the ACF President’s Medallion for contributions to the master chef exam, and The Cutting Edge Award in 2013 by ACF national president Michael Ty, CEC, AAC, in recognition of his leadership and service to the culinary profession. Chef Ron is past Chair of the ACF Certification Commission. He holds a Masters in Business Administration (MBA) from Empire State College in Saratoga Springs, NY.